Flowers of Our Faith

When a Christian man died recently, I sent flowers to the funeral home where the service would be held.  I sent a red carnation and a red rose together in a simple vase.  Here's why.

Late on a Sunday afternoon I arrived at the nursing home to visit Eileen.  I am documenting what happened on that visit because it's going to be hard to beat.

First I stopped to say hello to Carol, the receptionist at the front desk.  She was putting the finishing touches on greeting cards she makes for her own use or sells for just two dollars each.  They're worth much more.  On the front of each one are bright, beautiful flowers.  She paints each and every one - no copies.  I marveled at the work and her talent.  I looked at all of them and then asked if I could borrow two of them to show Eileen.  I picked out the carnations and the roses.

Eileen was sitting on the edge of her bed as if waiting for me.  She enjoyed very much looking at the cards and hearing how Carol had painted them.  I suddenly realized that God had arranged something very special.

"Eileen," I said, "these flowers can teach us our faith!  Do you want to know how?"  She did of course.  "Let's start with the carnations.  They can remind us of the Incarnation, when God's Son was conceived by the Holy Spirit and became man for us."  We talked about that a bit more.  Then we looked at the roses again.  "Of what do they remind us?" I asked.  She correctly remembered that a rose is part of Luther's seal.  "That's right," I said, "but there's something even more!  Let's go find it together!"  So we began saying the Apostles' Creed slowly but surely until we came to the words: "The third day He rose again from the dead."

"There's the rose!" I exclaimed.

"There it is!" she said as excitedly as I.

We finished saying the creed.  We sang a hymn together and then, holding hands, prayed the Lord's Prayer.  Lastly I showed her a small crucifix and instructed her never to forget it.

"I'm going to go tell Carol what we did with her beautiful cards - and you helped me, Eileen!  It's because of my time with you that I have a new devotion to share with others!"

Four dollars later I left the nursing home with those two cards and a bright, beautiful way to teach others our holy Christian faith. 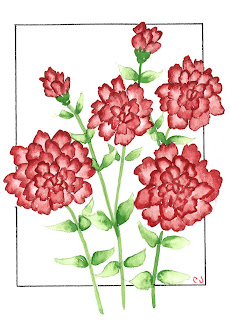 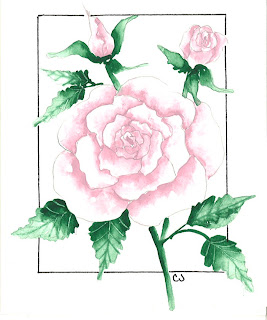