The Ground Zero Cross must be remembered.  It tells of a God who suffered for us, and who suffers with us.

To begin with, September 14 has long been called Holy Cross Day.  On that day in the year 320 Helena, the mother of Constantine, is believed to have discovered the cross of our Lord on which He died.  It is one of the earliest Christian feast days, and points to the centrality of the death of Jesus in the Christian faith.

Enter September 13, one day before.  On this day in 2001 an excavator named Frank Silecchia discovered, amid the rubble of the World Trade Center, a cross.  A T-beam weighing thousands of pounds had the unmistakable shape of a cross, and had fallen into a perfect upright position.  It was carefully removed, blessed, and stands today.

I confess, I don't know for a fact whether Helena found the actual cross of Christ.  What I do know is that Frank Silecchia did.  And he found it where the true cross will be found: right smack in the middle of human tragedy, suffering, and death.

To bring us through. 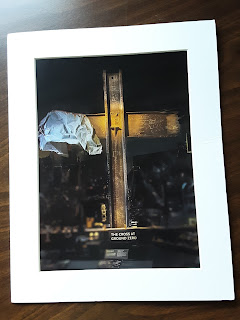